Who chooses the public art? 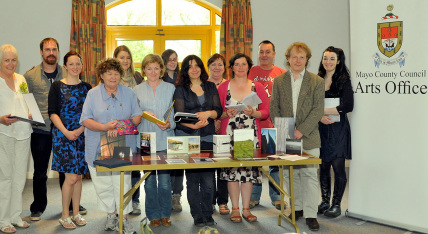 Twelve artists attended a fake public art judging panel in Castlebar in June 2011 in order to find out how commissions are chosen and how to improve their chances of gaining commissions.

The Fake Public Art Panel involved the artists judging a number of fake applications which had been prepared by professional artist, and regular judging panel participant, Aideen Barry.  She made them as close to the type and quality of real applications as possible, including all the usual errors often found in typical submissions.

After all the applications had been read there was then a lively debate about each one, referring to the judging criteria used in real panels, such as the artistic merit of the idea, if it is relevant to the area, if it is realistic and original, and also considering maintenance and long term benefits for communities.  As is often with real panels there were two proposals which were hard to choose between and a scoring system helped to identify the most appropriate proposal for the commission.

The idea for the event came from the Public Art Co-ordinator realising many artists were making similar mistakes and limiting their chances of gaining commissions.  There are also misconceptions about selection panels, how they work, and what they are looking for.  The intention of the Fake Panel day was to make as transparent as possible the process involved and for artists to gain a greater understanding of the competition they are up against and how their proposals could be judged against the usual selection criteria.  The day was also a great opportunity for local artists to network with each other and share information and experiences over lunch.

The day finished with a presentation from Gaynor Seville and Aideen Barry, outlining the key dos and don’ts when applying for commissions.  The artists who participated were very enthusiastic and positive about the experience, one commenting “It did not seem anything like a "Fake" panel and I now really understand the enormous task a panel has in selecting an artist for a particular project.”   Every artist who attended agreed it would have an impact on the way they applied for commissions in the future.

Due to the overwhelming response this initiative received and the waiting list of artists who wanted to attend, the Fake Panel is hoped to be rolled out nationally and we hope to have further details of this soon.